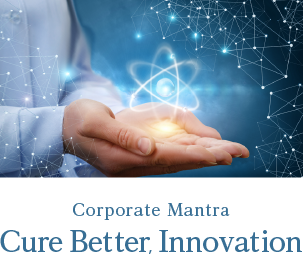 Pursuant to our corporate mantra “Cure Better, Innovation”, AMS will deploy nuclear medicine based Theranostics, which combines both therapeutic and diagnostic capabilities in one dose for cancer treatment, as well as to pair Theranostics with artificial intelligence to enhance their effectiveness in terms of Precision Oncology.

In connection with executing our disruptive growth strategy, AMS is presently working in the application process to the Pharmaceutical and Medical Devices Agency (PMDA) on a phased approach to bring 68Ga-PSMA-PET diagnosis for prostate cancer to Japan that is available at UCSF and UCLA as a result of the approval from the U.S. Food and Drug Administration on December 01, 2020, and at medical institutions using 68Ga-PSMA-PET as parts of a clinical trial in Europe and Australia. AMS also plans to establish the capability to produce radioisotopes of interest in Japan as part of our overall strategy for Japan and the Asian region. AMS, through its subsidiary Medical Isotope Prime Japan (MIPJ) is also securing long-term, stable supplies of key medical isotopes to enable the development of new treatments by Japanese research institutions and hospitals. This includes alpha therapies using actinium225 (Ac225) which is an isotope that is in high demand, but short supply in Japan and globally.

AMS team is the right mix of passion and experience from diversified industries, including experts in nuclear medicine, business development, and regulatory affairs.

Description of business
Production, import, development and sales of radio-isotopes and medical devices